Finding enough overhead bin space for carry-on luggage is a problem for a lot of travelers who dislike checking bags, waiting at the carousel … or even worse, dealing with lost luggage.

More and more airlines have or are updating their overhead bins to accommodate more carry-on luggage, but travelers have been slow to catch on to putting their bags on their sides rather than flat – often because the bag don’t look as if they will fit.

The taco analogy only goes so far, but I personally think the “stow your bags like a book” makes a little more sense … but then again, most books are taller than deep???

Check out the WSJ article on the subject: 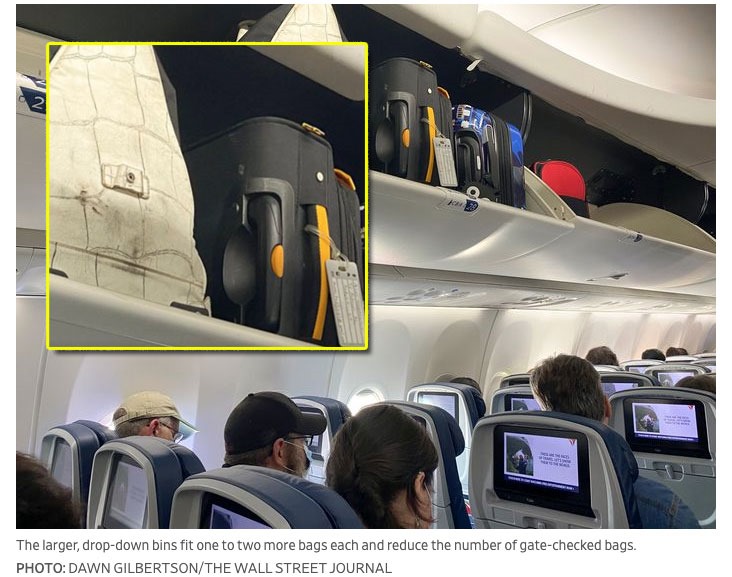 Squeezing everything into a carry-on bag is challenging enough. All that work goes out the window if there isn’t enough room for your bag in the overhead bin.

Airlines and airplane manufacturers have invested vast sums designing bins that fit more bags. But they’re running into a problem: Some passengers can’t figure out how to use them. Flight attendants are spending extra time rearranging bags before departure and repeatedly making announcements about how to stow them correctly.

A growing number of planes have larger, drop-down bins, which fit one to two more bags each and reduce the number of gate-checked bags. American Airlines and Delta Air Lines have them on more than 80% of their planes excluding regional jets and United Airlines says the majority of its fleet will have them by 2025. Southwest Airlines, a major holdout, will join the club next year. American says it has seen a 30% decline in gate-checked bags since introducing the bigger bins.